Duty and taxes are included in prices !!

1974: BALL® The Jeans was founded by Aldo Ciavatta, in the city Rimini, Italy

In 1974 Aldo Ciavatta has been producing, designing and researching jeans for several jears and has now build up a career and a high respected name at the Italien Jeans market. With his well-known and respected reputation, he now chooses to become self-employed and create something big, based on his years of experience, learnings and huge network in the retail market. Beside beeing a skilled and well known player at the jeans market, Aldo Ciavatta is also know as being a very skilled, creative, inovative and successful businessman, and that combination makes it possible for Aldo to create history and bring BALL to life..

Aldo  desides to go in a new and inovative direction with a more loose fit and more creative colours and details than seen before. Aldo was very fascinated by the US college universe, and all his designs were based and inspired by the Amerian style. In the first years the inspiration came from the American college style and branches of sports as Polo, cricket and baseball. And in the first years, the collections were consisting Jeans, Poloshirts, Shirts and T-shirts.

BALL® The Jeans quickly becomes a big success in Italy and the success is growing rapidly and spread to the rest of Europe within few years.

First step is that Henri Fetter makes sure the company also becomes a success in the Benelux countries and the rest of the world. 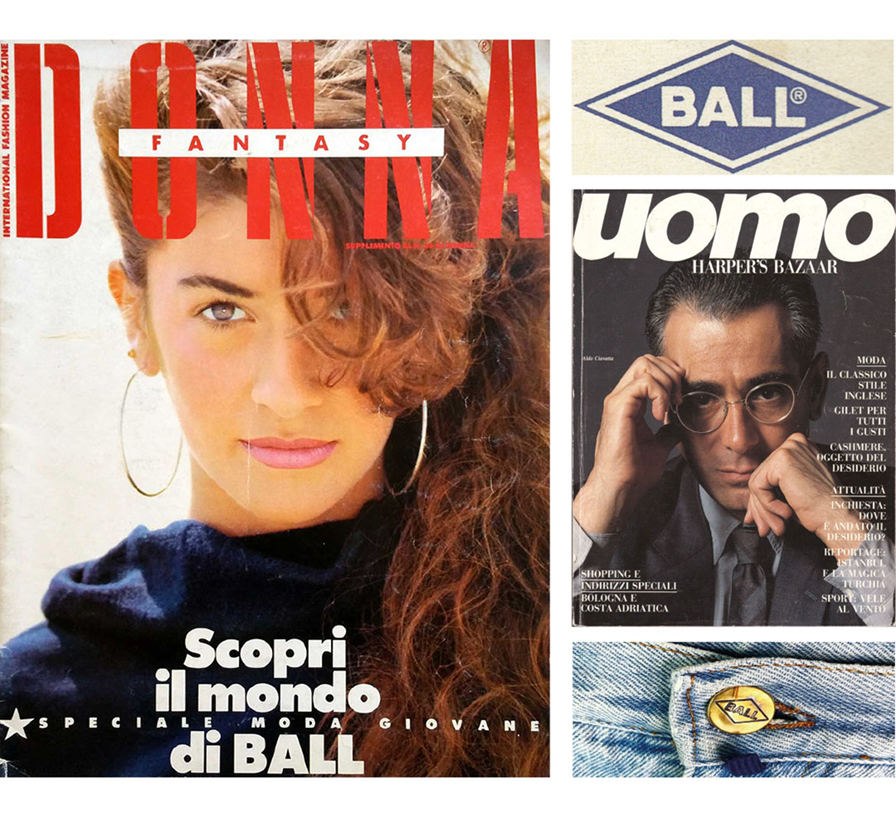 The two friends, Hans and Hans, by an accident achieved the BALL®  agency in Scandinavia. The two friends begins their journey in Denmark, and travels around the contry to find shops that could have an interest in the new and Italien jeans brand. This is though more difficult than first expected. The two friends decides to hunt the happieness in Norway, and suddenly one day a huge store chain, also known as H&M decides to take in the brand, which definitely was a game changer in the two friends journey. The following years, BALL®  grows massively and quickly becomes well known within the Scandinavian fashion industry.

The charismatic and innovative partner, Hans Gerhard Svarverud becomes the sole owner of the company. 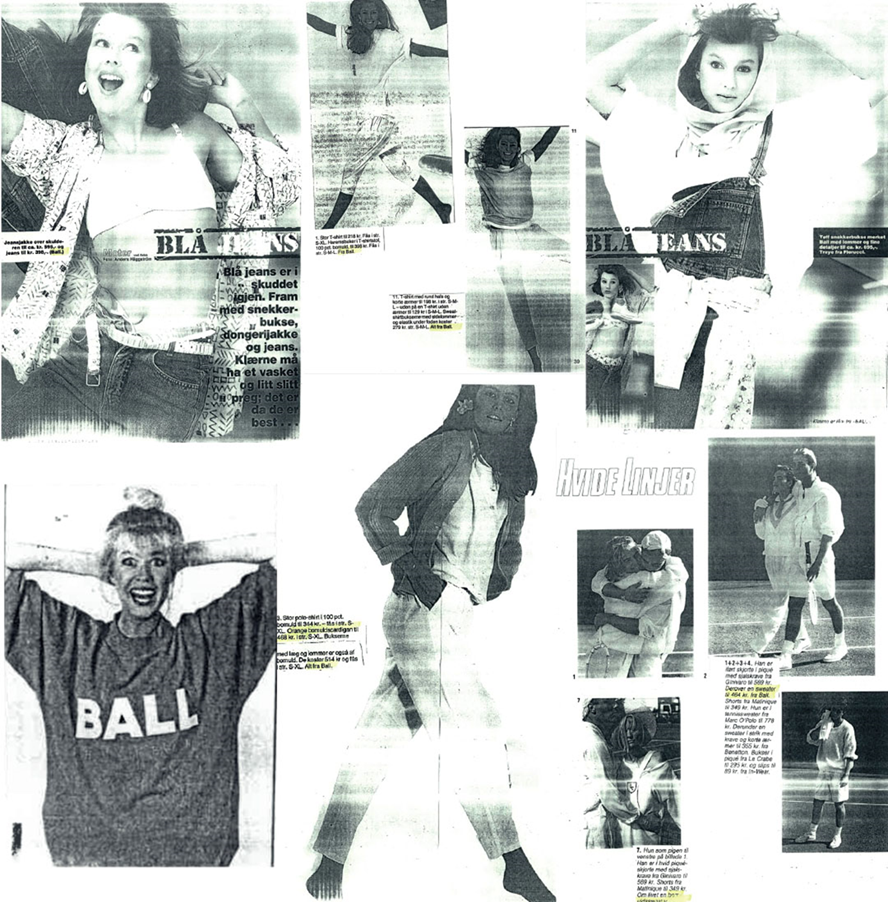 The following years BALL gets more and more succes and grows in to a huge and well known fashion brand all over Europe. Henri Fetter releases BALL®  in Germany as the last European country, and as the other markets BALL® becomes a massive success, and also in Germany all young and fashion interested people wants BALL® 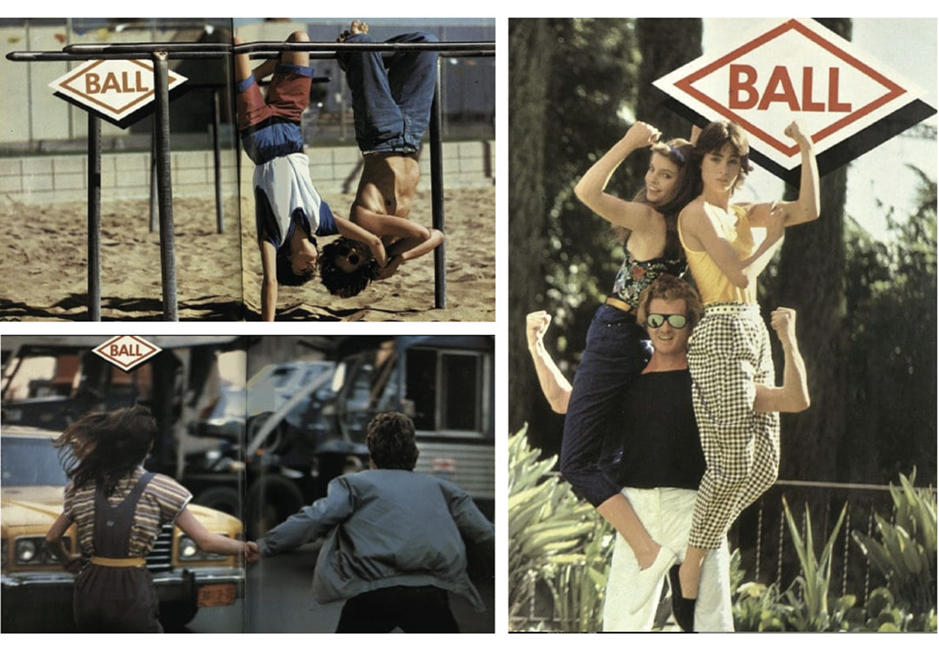 At the beginning of the 1980s, second-hand jeans became a hit in fashion. Based on the growing demand, BALL®’s employees started experimenting by adding different objects into the laundry washer to get the "used" denim look. After plenty experiments the employees discover that pumice are able to create the look without destryoing the denim fabrik, and developed the stonewash method that created the worn-down style jeans that were in fashion.

In 1982, they launched the first stonewashed jeans, and the BALL® jeans sales exploded. BALL® becomes one of the largest players on the Scandinavian jeans market. 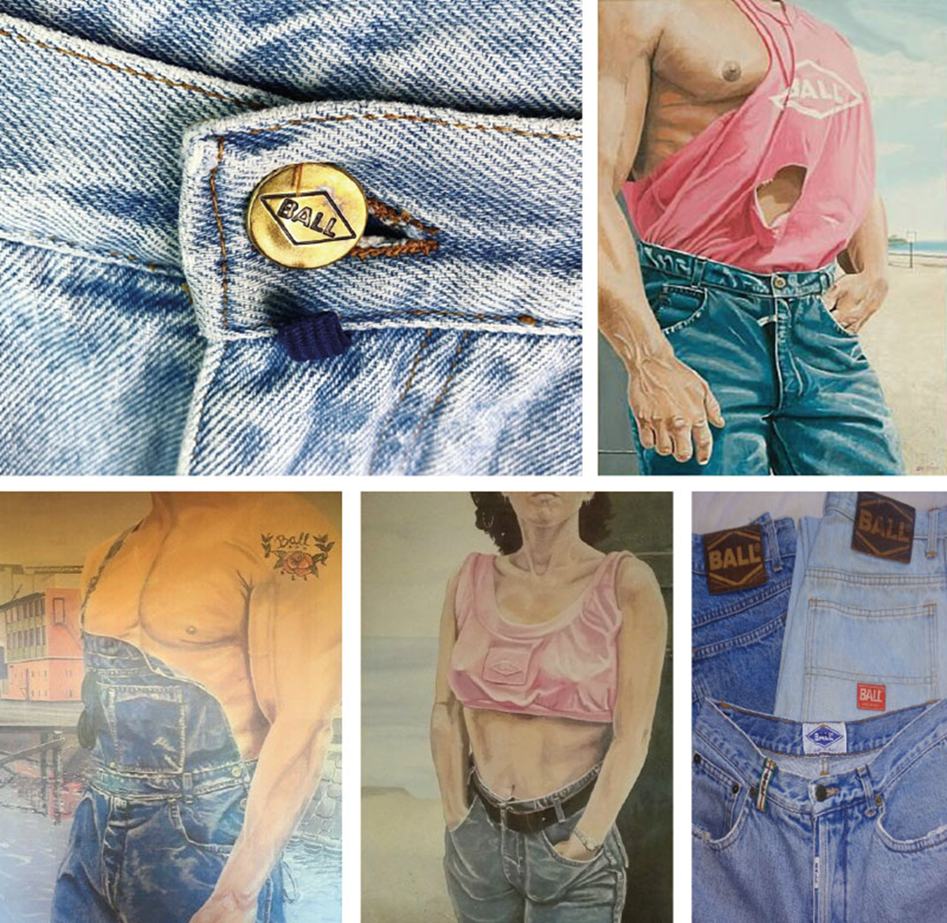 1983: BALL®  releases the first sweatshirt in Europe with print on it

The big success with the BALL® jeans created a growing demand for further products to match and finish off the unique BALL® look. Hans Gerhard Svarverud decides to further develop the sweatshirt with new flashy colours inspired by the american college style. In 1983, BALL® launched the first sweatshirt in Europe with print on it. The new sweatshirts led to renewed excitement and once again a new adventure for BALL®. All the way through the 1980s, 500,000 BALL® sweatshirts were sold yearly across Scandinavia. This meant BALL® was now one of the most dominant players in fashion both in regard to jeans and knitwear. 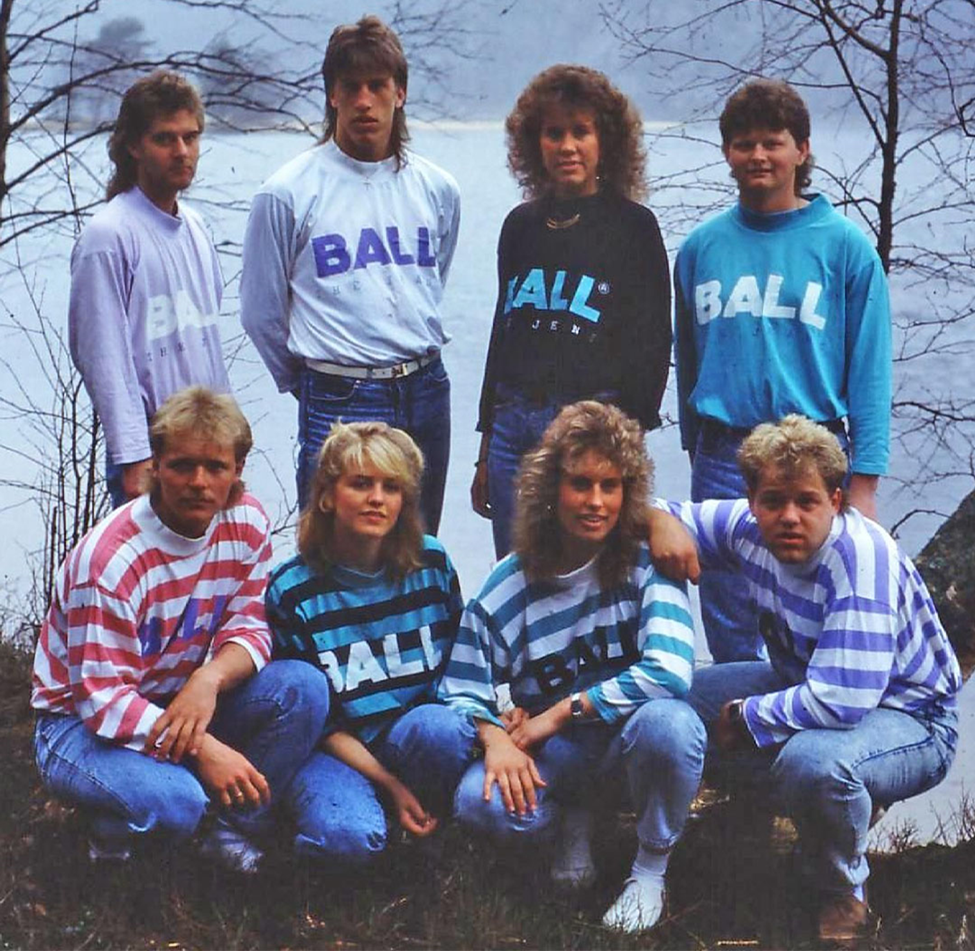 1989: BALL® shuts down in Italy and The Netherlands

The founder, Aldo Ciavatta ended up in jail in 1989 and the Italian branch of BALL® shut down. Shortly thereafter, the Netherlands branch did the same.

Opposite, Hans Gerhard continues sales in the Scandinavian market with success. 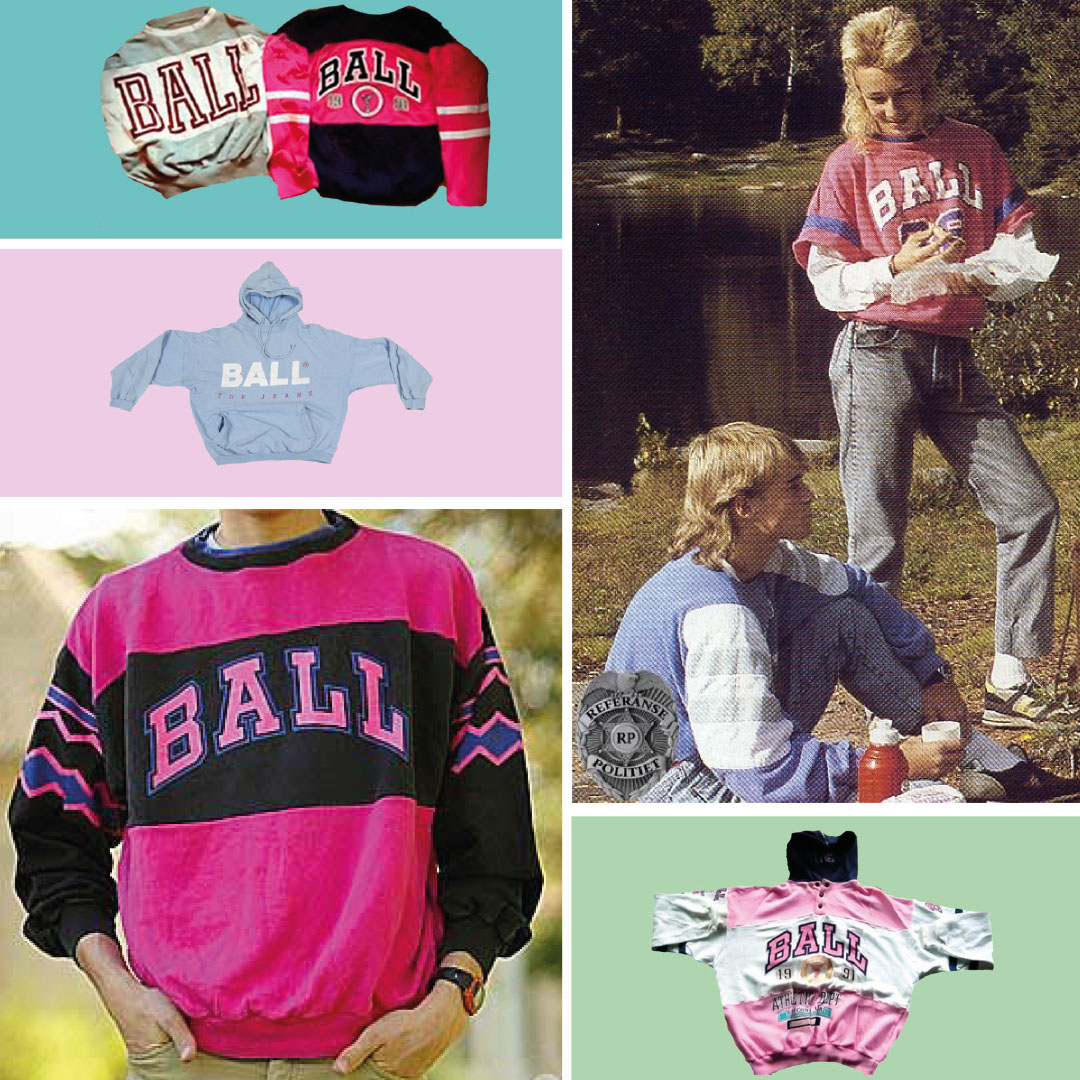 1998: Hans Gerhard Svarverud dies and the company shuts down a few years later

After Hans’ suddenly passing, BALL® employees take over the company. However, the magic and the innovative driving force behind BALL® is gone and the company shuts down a few years later.

After a 20-year break, BALL® is back. Months of research and the examination of hundreds of old class photos, photo albums from the years between 1976 and 1996, and old styles, makes is possible to recreate BALL®’s unique identity. With help from designers, stylists and experts, the BALL® team has been able to recreate and modernise the unique fit and the characteristic cut and created a collection of BALL®  jeans with more attitude than ever before. BALL® jeans’ relaunch is a collection containing high quality jeans aimed at those who truly care about jeans and won’t leave anything to chance.

The old BALL® sweatshirts have also been given a new change through updating and redesign. The strong 1980s design has once again been given new life. A collection full of attitude and character brings Europe’s first sweatshirt with print back to life again in a new and evolved version. 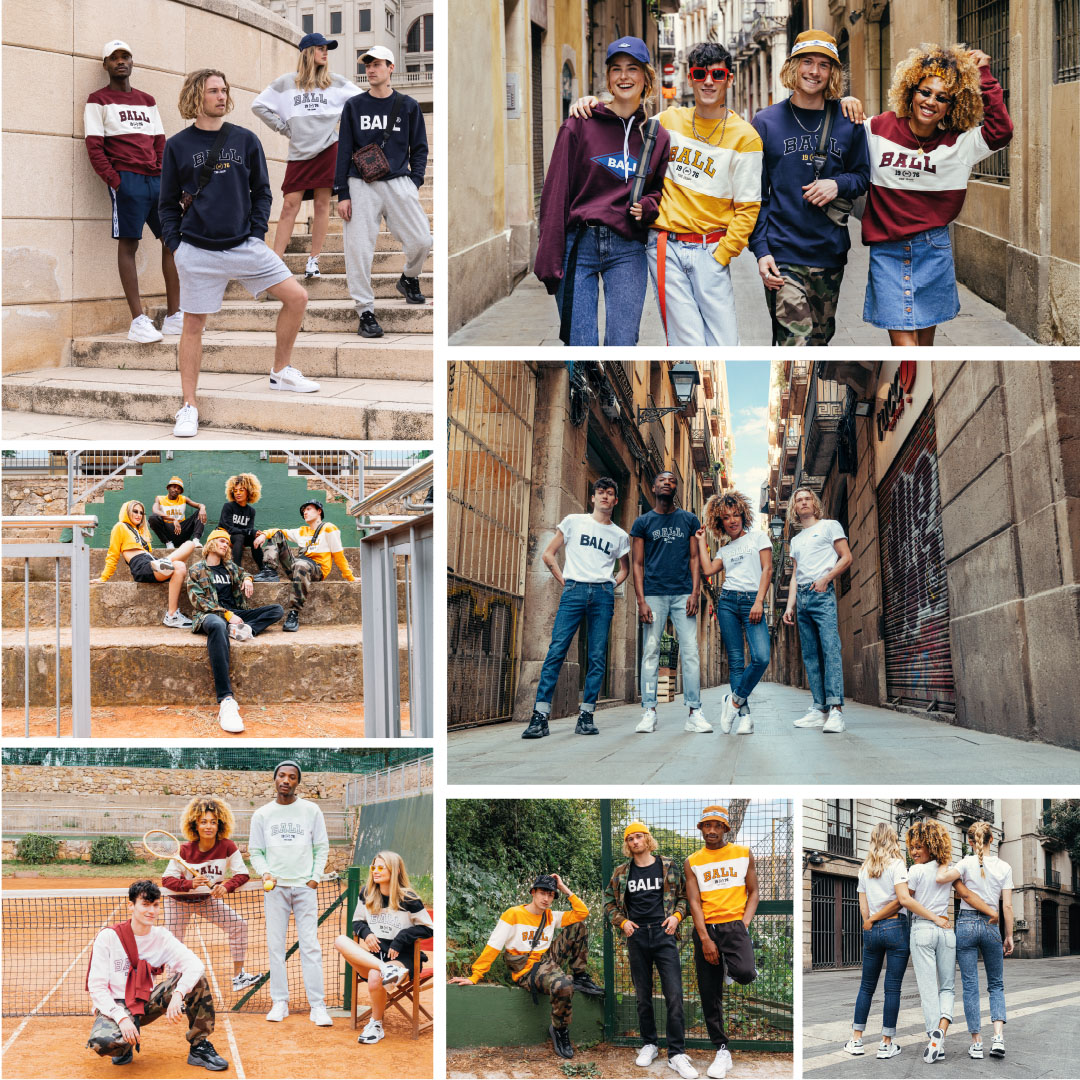 Get the new styles in your inbox